Monday, January 29, 1912:  It is hard to study when you don’t feel like it. Don’t know what will become of myself if I don’t get aroused pretty soon.

Perhaps Grandma made a snack while she was trying to motivate herself to study.

Popcorn was a very popular winter snack a hundred years ago. A few weeks ago I made old-fashioned Caramel Popcorn.  I enjoyed it so much, that I decided to make another old-time popcorn snack—Honey Popcorn Balls.

Put popped corn in a large bowl and set aside. Cook honey, sugar, water, and butter to a medium-crack stage (280 degrees).  Remove from heat and stir in salt; pour over the corn and stir with a spoon to coat the kernels.

Grease hands with butter. Firmly press coated popcorn into balls.  Lay balls on waxed paper until cool. If the balls will be stored, wrap in waxed paper.

I used some alfalfa honey that I got at an Amish market to make these balls—but any honey will work.  I love the flavor of the light alfalfa honey, but think it would also be fun to experiment and make them again with a darker honey.  Maybe next week. . . .

Sunday, January 7, 1912: Walked to Sunday School this morning though the new fallen snow. I wore my old hat because I didn’t want to get snow on my new one. Miss Carrie was over this afternoon, and we had popcorn by the way of refreshments. By so doing I broke the third commandment for I was the one who did the popping.

Miss Carrie was Grandmas’ friend Carrie Stout. She lived on a nearby farm. I believe that the third commandment refers to “Remember the Sabbath day to keep it holy.” Today that is generally the fourth commandment, but I believe that some denominations number the commandments differently.

The popcorn that Grandma popped was raised on the Muffly farm. In May 1911 she wrote about planting popcorn. In the fall it would have been harvested and hung to dry. When the corn had just the right amount of moisture for popping, the family would have shelled it and stored it in a glass jar until they were ready to pop it.

Grandma probably popped the corn in a cast iron skillet. I bet that she sometimes “dressed it up” and made Caramel Corn.

Here’s a great hundred-year-old recipe for Caramel Corn  that was in the 1912 Boston Cooking School Cook Book by Fannie Farmer. (It is called Sugared Popcorn in the book.)

Put butter in saucepan, and when melted add sugar and water. Bring to boiling point, and let boil for sixteen minutes. Pour over corn, and stir until every kernel is well coated with sugar.

I salted the popped corn before mixing with the syrup. This recipe is a keeper. The Caramel Corn turned out perfectly.

Saturday, November 25, 1911: Just exactly one month yet. I must begin to be good and oh so nice. I was terrible busy this forenoon. This afternoon I studied a bit and popped some popcorn. My first attempt resulted in half or about a third of the contents jumping out of the pan, but the next time I was more successful. 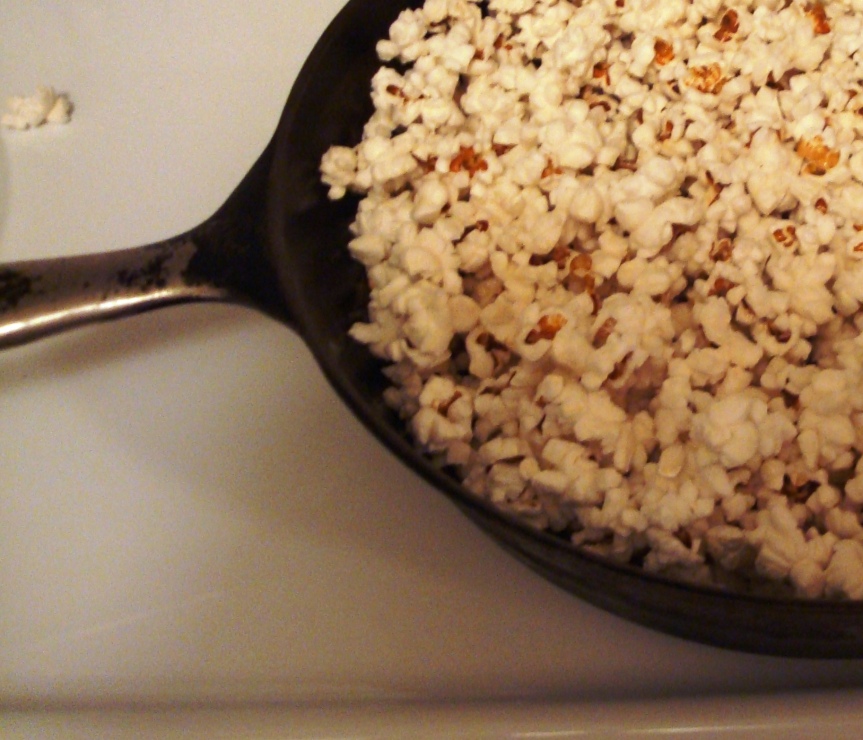 Hmm, I wonder how the popping corn managed to jump out of the pan.  People used to pop corn in a heavy frying pan, but they generally put a cover on the pan.

To make popcorn heat vegetable oil in a heavy frying pan until it is hot. Use a medium heat or flame.

Put some popcorn in the pan.  (Use about 1/3 cup for an average sized pan.) Cover pan.

Hold about ½ inch above the burner and shake the pan. You don’t need to shake it rapidly; it’s okay to shake the pan relatively slowly.

Shake until the corn stops popping, and then remove from the heat and open lid.