Sometimes it seems like I get into a rut when making breakfast foods – and tend to just make the same two or three foods over and over. So I’m always looking for easy-to-make recipes for breakfast foods. I recently saw a hundred-year-old recipe for Nut Pancakes, and decided to give it a try.

This recipe is a keeper. The pancakes contained lots of chopped walnuts, and had a lovely texture and flavor.

Put the milk in a cup or bowl, then stir in the vinegar or lemon juice. Set aside for at least 2 minutes.

Put the bread flour, salt, baking soda, baking powder,, melted butter, and milk that has been combined with the vinegar or lemon juice in a mixing bowl; beat until smooth. Stir in the chopped walnuts.

Heat a lightly greased griddle or skillet to a medium temperature, then pour or scoop batter onto the hot surface to make individual pancakes.  Cook until the top surface is hot and bubbly, and then flip and cook other side. 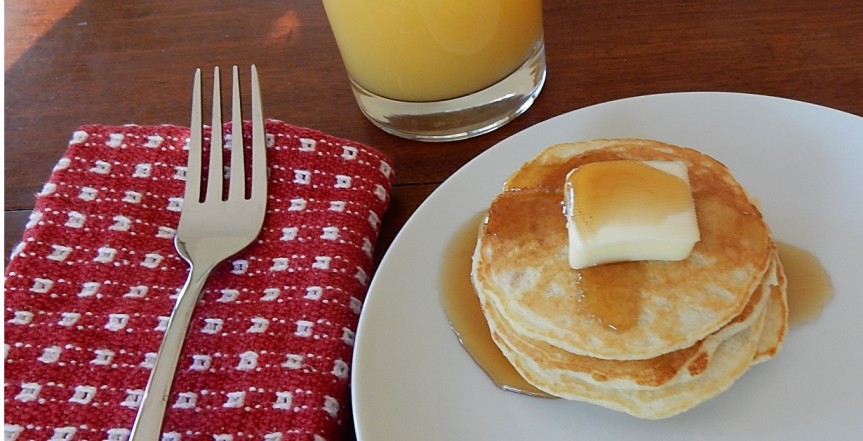 Food was a major expense for many families a hundred years ago, and cooks tried to minimize food waste. Bread – often homemade – sometimes went stale before it was eaten, and rather than just throwing the stale bread out, they looked for ways to use it.

I recently came across a hundred-year-old recipe for Bread Griddlecakes that called for using stale bread crumbs (and relatively little flour), and I just had to give it a try. The Bread Griddlecakes turned out well. This recipe made relatively thin pancakes that had a nice flavor. If I hadn’t made them myself, I never would have guessed that they contained breadcrumbs. Maybe I shouldn’t have been surprised since bread is made out of flour – so at some basic level this recipe contains similar ingredients to may typical recipes.

Modern bread (at least store-bought bread) doesn’t seem to go stale, so I just used bread that wasn’t stale when I made this recipe.

I’m not sure why the old recipe called for scalded milk, so I used milk that I didn’t scald. It worked fine.

It’s fascinating how words change across the years. The original recipe title had a hyphen between “griddle” and “cake.” Today “griddlecake” is generally written as one word – or people just call them pancakes.

Put the bread crumbs and milk in a mixing bowl, then soak until the crumbs are soft (10 – 15 minutes). Add butter, eggs, flour, salt, and baking powder; beat to combine.

Heat a lightly greased griddle to a medium temperature, then pour or scoop batter onto the hot surface to make individual griddlecakes. Cook on one side, then flip and cook other side.

Saturday morning, and I still hadn’t made a hundred-year-old recipe for this week. I wanted to make something easy, yet tasty. And, week-ends are the perfect time for pancakes, so I flipped through my hundred-year-old cookbooks looking for an easy pancake recipe. I found a recipe for Corn Meal Griddle Cakes that fit the bill.

After adapting the recipe a bit because the batter was too dry (it wasn’t even really a batter) when I followed the original recipe, the Griddle Cakes turned out well. They had a nice taste and texture that reminded me a bit of corn meal muffins.

This recipe made me wonder how spelling and terminology has changed over the past hundred years – though I ended up deciding that perhaps it reflected regional variation more than change over time.  If I’d written this recipe, I would have combined “corn” and “meal” into one word “cornmeal.” And, I’d have called them “pancakes” rather than “griddle cakes.” Yet when I google whether corn meal is one word or two – it appears that either way is acceptable. And, there are modern recipes for griddle cakes..

Something is off with the amount of liquid called for in this recipe. When I made it, I ended up with a crumbly mixture rather than a batter, so I added small amounts of additional milk several times until I had a thick batter. By the time, I had a satisfactory, batter I’d added almost an additional cup of milk beyond what was call for in the recipe.

Bring water to a boil in a large saucepan, then stir in the cornmeal. Remove from heat, and stir in shortening, 1 1/4 cups milk, and molasses. Add flour, salt, and baking powder; beat until well-mixed. If the mixture is too dense, add additional milk until there is a thick batter.

Heat a lightly greased griddle to a medium temperature, then spoon batter onto the hot surface to make individual pancakes. Use back of spoon to spread the batter into 3-4 inch circles. Cook until the top surface is hot and bubbly, and then flip and cook other side.

[Note: I made this recipe in a large saucepan that did not contain a stick-free surface. I added ingredients and beat the mixture in the pan. However, all the beating and stirring has the potential to damage the coating of some pans, so it might be preferred to heat the water to boiling, then pour it over corn meal that is in a mixing bowl – and then proceed from there using a mixing bowl rather than a saucepan.]

I’ve eaten stacks of pancakes with  bacon on the side for years  .  . . boring.  So I was thrilled to find a hundred-year-old recipe for Mining Camp Cornmeal Pancakes.

The hearty giant pancakes embedded with bits of bacon are cooked in a skillet, and are cut into triangles to serve.  The pancakes were a delightful taste treat that took me back in time to the days of hungry hard-working gold and silver miners in remote locations.

The old recipe also indicated that, if preferred, smaller, more typically-sized pancakes could be cooked on a griddle.

And, here’s the recipe updated for modern cooks:

Put the bacon  pieces in a skillet, and cook over medium heat until the bacon just begins to crisp; stir occasionally while cooking. Remove from heat and set aside. Reserve a small amount of the bacon fat to grease skillet.

In the meantime,  put cornmeal, flour, baking powder, sugar, shortening, eggs, and milk in a mixing bowl; beat until combined.

Option 1 – Large Pancakes that are Cut into Triangles: Generously grease a skillet with bacon fat. (I used a 6 inch, cast iron skillet). Heat skillet until hot using medium heat, then spoon 3/4 inch of the batter into the pan, sprinkle with the cooked bits of bacon.  Reduce heat to medium low, cover and cook for about  3-4 minutes or until the batter is bubbly; then turn the pancake over and cook the other side. Remove from heat, and cut into triangles. Cook additional pancakes until all the batter is used.

Option 2 – Regular-sized (3 – 4 inch)  Pancakes: Heat a greased griddle until hot; then spoon or pour approximately 1/4 cup batter onto griddle for each pancake. Sprinkle bits of cooked bacon on the top of each pancake. Cook until the batter is bubbly, then flip pancake and cook the other side. 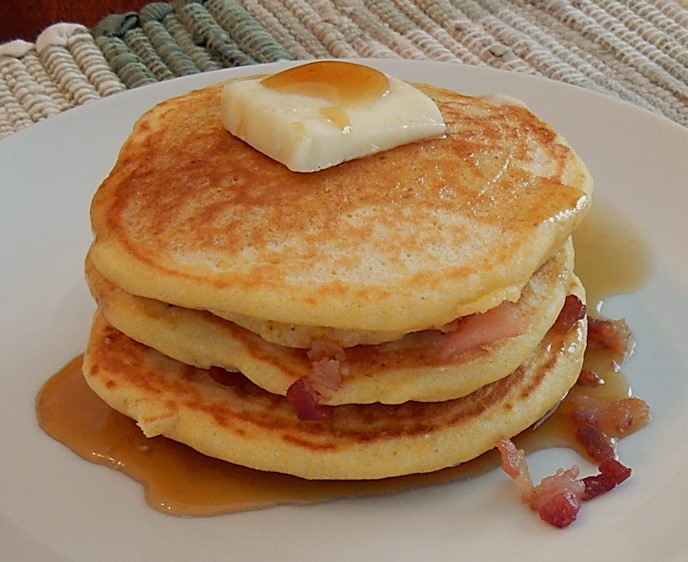 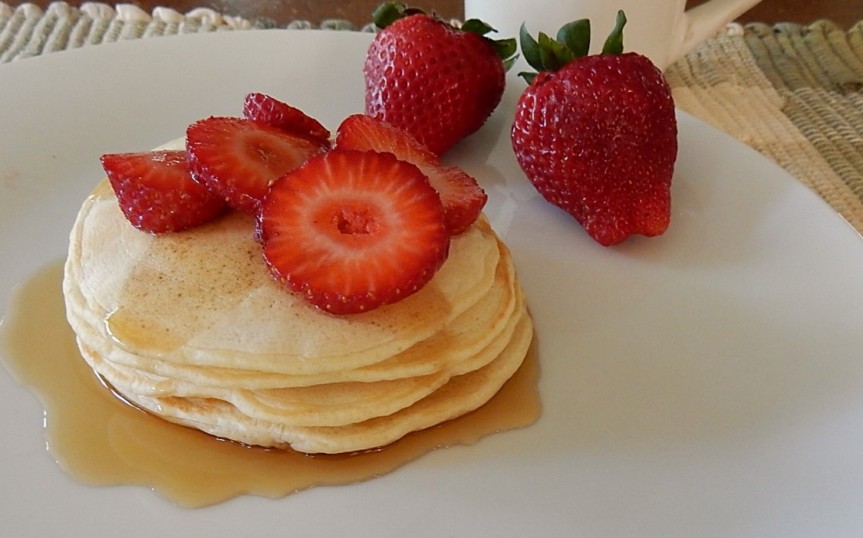 When browsing though old books and magazines, I always keep a lookout for easy-to-make, hundred-year-old breakfast recipes. So when I saw a recipe for Sour Milk Griddlecakes in a 1915 home economics textbook, I just had to give it a try.

Of course, griddlecakes are just another name for pancakes, but somehow even the name evokes old-fashioned goodness.

The Sour Milk Griddlecakes did not disappoint. Unlike most modern recipes,  this recipe doesn’t call for any sugar, so the griddlecakes have a very delicate, slightly tangy, neutral flavor that is ready to soak up the goodness of syrups,  jams,  or other sweet toppings.

Put all ingredients in a mixing bowl, beat until smooth. Heat a lightly greased griddle or skillet to a medium temperature, then pour or scoop batter onto the hot surface to make individual pancakes.  Cook until the top surface is hot and bubbly, and then flip and cook other side.

This recipe is from an era when pasteurized milk was not the norm since it calls for sour milk. In the old days raw milk would sour—but still be good for cooking. Vinegar can be used to “sour” pasteurized milk, so I made that adaptation when modernizing the recipe.

When I saw a recipe in a hundred-year-old issue of National Food Magazine for sweet potato waffles, I was intrigued—but I seldom make waffles. I then wondered if the same recipe would work to make pancakes.

Well, I gave it a try, and the Sweet Potato Pancakes were awesome. The recipe called for separating the eggs, and beating the egg whites until stiff. It definitely was worth the extra effort. The pancakes were incredibly fluffy and light.

I served the pancakes with maple syrup. The vivid, yet delicate, sweet potato flavor worked perfectly with the maple syrup to create a lovely taste experience.

Sweet Potato Pancakes would be perfect for an autumn brunch. This seasonal dish will impress even your most discerning foodie friends.

In a separate bowl, beat the egg whites until stiff peaks form. Gently fold the beaten egg whites into the sweet potato mixture.

To make pancakes: For each pancake, put two heaping tablespoons of the batter on a hot, lightly-greased griddle. Using the back of the spoon gently spread the batter to make a 3-inch pancake. Lightly brown on both sides. Serve with butter and honey or maple syrup.

Note: Batter may also be used to make waffles.

*Mash cooked sweet potatoes with a fork until smooth.

Monday, January 23, 1911. Here’s Monday, another school day. It’s so hard to get up awful early, when you feel nice and sleepy.

Sometimes I wish that Grandma provided more detail when she wrote. For example, I wonder what Grandma ate for breakfast.  I imagine that it was similar to what I ate two generations later when I was growing up on another farm near McEwensville—but I might be totally wrong.

In January we generally ate pancakes (griddle cakes) for breakfast. We often ate pancakes made from a mix, but occasionally had the more traditional buckwheat griddle cakes that I envision would have been eaten when Grandma was young.  After the pancakes were cooked I’d put maple syrup or jam on mine—but my father always put old-fashioned liverwurst on his. We only had pancakes when liverwurst was available, and that was only during the winter months when my family or a neighbor butchered a hog.

One find was a promotional cookbook published by KC Baking Powder in 1911 that contains a recipe for Buckwheat Griddle Cakes. I decided to make the recipe to see if they were like the buckwheat cakes I remembered.

Sift together, three times, the flour, sugar, salt, and baking powder*; stir the water in all at once and bake immediately on a hot well-oiled griddle. Buckwheat flour calls for a generous measure of baking powder. Part milk may be used to mix the cakes but water give quite as good results.

*I just stirred the ingredients together and didn’t sift anything. I’m not sure why old-time cookbook authors were obsessed with sifting.

I was surprised how few ingredients there were, but from looking through the cookbook I realized that most recipes a hundred years ago had very few ingredients. I guess that since people cooked from scratch every day that they gravitated toward simple recipes.

After I’d cooked the griddle cakes—I poured some maple syrup on them and took a bite. They were very good though the robust taste of the buckwheat was a prominent undertone.

I then remembered that I had a jar of homemade current conserve  that a friend of my daughter’s had given me. (An aside–I think that it’s really cool how some young people care enough about what they eat to revive traditional cooking and food preservation).  I spooned a little conserve on the griddle cakes and took a bite—and the taste was awesome. The tartness of the conserve wonderfully complemented the robustness of the griddle cakes—and I almost felt like I had drifted back to Grandma’s day.