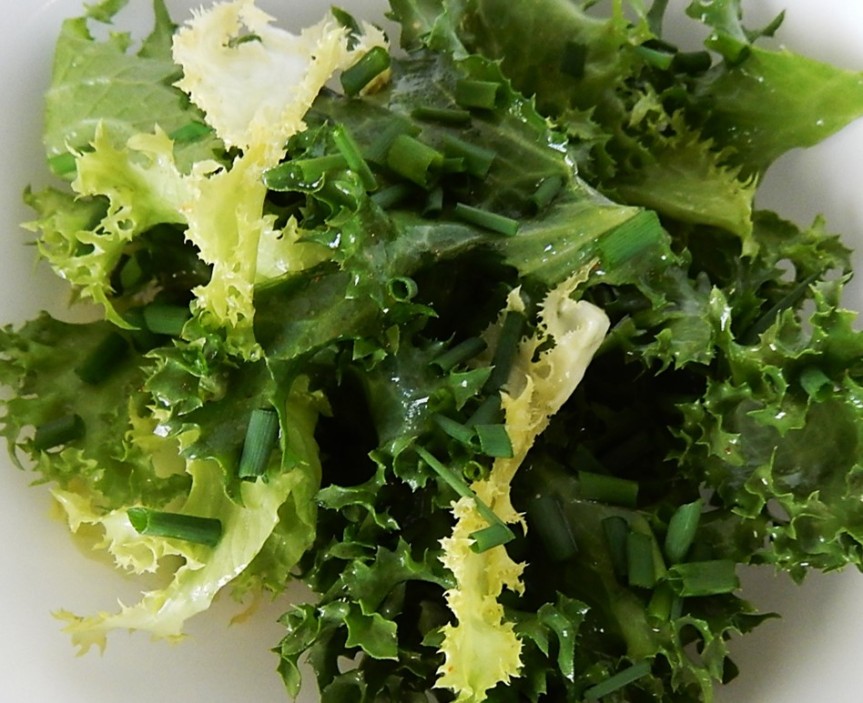 Even though I found this recipe in a hundred-year-old cook book, it probably was considered a tad old-fashioned in 1916. Cooks a hundred years ago worried that tossed salad greens looked disorganized, and sought to impose order to salads using  scientific salad making techniques that,  for example, embedded ingredients in gelatin. Thank goodness strange food trends get reoriented over time. In 2016, this old recipe seems amazingly modern–and Endive Salad would be perfect with grilled salmon, chicken, or other dishes.

Wash the endive and pat dry with paper towels, then tear the endive into bit-sized pieces and put into a large bowl. Set aside.

To prepare the dressing: In a small bowl, combine the mustard, salt, paprika, red pepper, onion, olive oil, and vinegar.

Pour the dressing over the torn endive and gently toss. Refrigerate for at least one hour, then drain off any excess dressing and place the marinated endive in a serving bowl. Garnish with chopped chives. 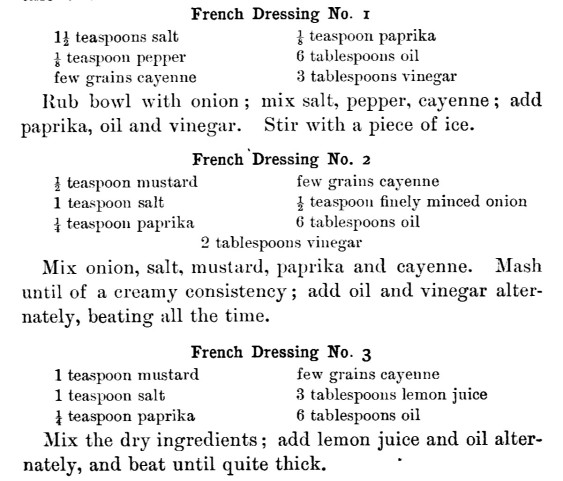 French Dressing apparently was very popular a hundred years ago. Lowney’s Cook Book, a cookbook published in in 1912, had three French Dressing Recipes – none of which are anything like the cloying bright orange bottled dressing that’s in all the supermarkets today. I made French Dressing, Number 2. In my opinion, the original recipe was too salty, so when I updated the recipe, I only used half as much salt as was called for in the old recipe.

Monday, April 10, 1911: I helped to wash this morning. Mistress Besse was out this afternoon and went with Miss Ruth out to gather some delicious dandelion. Ours was no good after all.

Dandelion, endive, and other bitter greens used to be considered a spring tonic. People traditionally had a very limited selection of foods during the late winter months, and they really looked forward to eating fresh greens in the spring.

When I was a child we often ate creamed dandelion served over mashed potatoes in the spring. I remember older relatives saying that they felt healthier after eating spring greens.

Wash dandelion and tear into pieces; set aside.

Cut bacon into pieces and fry until crisp in a large skillet. Stir in flour, sugar, and vinegar. Gradually stir in milk; heat until bubbly using medium heat. Reduce heat to low; stir in dandelion and cover for 1 minute. Remove lid and stir until wilted. Delicious when served over mashed potatoes.