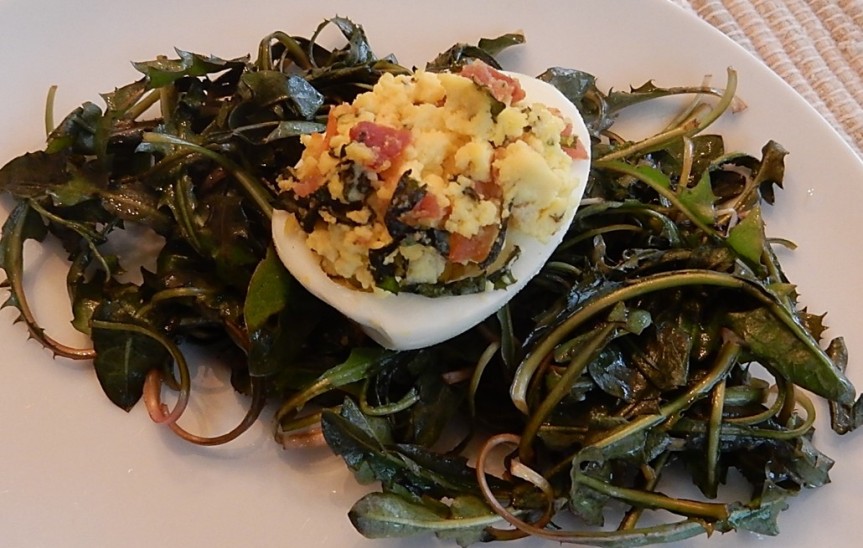 I love to browse through hundred-year-old cookbooks. Sometimes I flip through cookbooks looking for an inspiration about what to make; other times I’m looking for a certain type of recipe. Today, since I had hard-boiled Easter eggs, I knew that I wanted to make a recipe that called for hard-boiled eggs. I found several recipes which were candidates for this post, and then I read the ingredient list for Dandy Stuffed Eggs and saw that it called for dandelion greens. I immediately knew that I’d found the recipe that I was going to make for today’s post. .

I have memories of my grandfather foraging dandelion for my mother to prepare;  and each year I carry-on the tradition. Maybe it is my imagination but eating dandelion always seems to restore my energy after a long winter. My mother always called dandelion greens her spring tonic.

Back in the days before modern supermarkets with produce sections filled with fresh fruits and vegetables year round, nutrient-rich dandelion was one of the first greens available in the spring, and people craved them. Dandelion greens contain lots of vitamins and minerals including vitamin A, folate, vitamin K, calcium, and potassium.

The Dandy Stuffed Eggs were wonderful The eggs are stuffed with a dandelion, bacon, onion, and vinegar mixture  The stuffed eggs are served hot on top of a bed of wilted dandelion.

One teaspoon of salt seemed like a lot, so when I made the recipe I only used half as much.

If desired, sugar and additional vinegar

Preheat oven to 375° F. Thoroughly wash dandelion greens, then take about 1/2 cup of the greens (reserve the remaining greens) and put in a small skillet.  (No additional water is needed, since the dandelion greens should have some water clinging to it.) Using medium heat, wilt the greens while stirring constantly (about 1-2 minutes). Remove from heat and chop the wilted greens.

In the meantime, cut the eggs in half and remove the yolks and put in a bowl; then mash the yolks using a fork. Add the chopped wilted dandelion greens, onion, bacon, salt, and vinegar. Stir to combine; then stuff the egg whites with the egg yolk mixture.

Put the stuffed eggs in a baking dish. Cover and put in oven until the stuffs eggs are hot (about 15 minutes.)

In the meantime, put the remaining dandelion greens in the skillet. Using medium heat, wilt slightly while stirring constantly. If desired, sprinkle with sugar and add a splash of vinegar. Remove from heat.

To serve, put wilted dandelion greens on serving plate or bowl. Place the stuffed eggs on top of the greens. 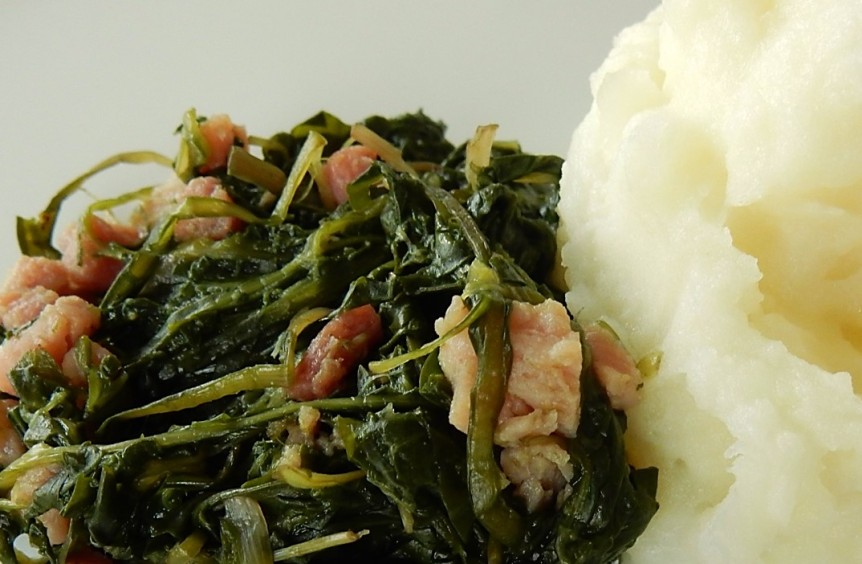 Each Spring a primordial urge pulls me out of the house –paring knife and bowl in hand– to the weedy natural area at the far edge of my yard. Luscious green dandelion plants peek through the brown leaf-covered grass. The winter has been long and hard, and I desperately need to renew myself. The tender foraged greens are my spring tonic (as they were for my parents and grandparents).

People traditionally ate a very limited selection of foods during the late winter months, and often they were nutrient-deprived by April. Their bodies told them they needed the vitamins, minerals, and antioxidants provided by the emerging dandelion leaves.

Since I’m a dandelion connoisseur (Is it possible to be a connoisseur of weeds?) , I was thrilled to find a hundred-year-old recipe for Dandelion with Ham or Bacon.

I made the ham version. The ham bits nicely balanced the slight bitterness of the small tender dandelion leaves. As I hungrily devour the dish,  I can almost feel the nutrients surging through my body. I’ve made it through another winter. Spring (and fresh food) have arrived – and I know that the summer’s bounty will be here soon. Life is good.

When I made this recipe, I made one-quarter of the original recipe. Here’s the recipe updated for modern cooks:

Dandelions with Ham or Bacon

Thoroughly wash the dandelion. (I triple wash it, and it is a slow process. The washing of the dandelion is what takes most of the time when making this recipe.)  Put in a large sauce pan and cover with boiling water. Place on stove, bring back to a boil using high heat. Boil for 15 seconds then remove from heat and drain thoroughly. Just barely cover the dandelion with fresh boiling water, add ham or bacon, salt, and pepper. Cover and place back on the stove. Return to a boil using high heat, then reduce heat and simmer until the meat is tend and the dandelions are almost dry (they should still have a little juice (about 25 minutes).  Remove from heat. If desired, serve with boiled turnips or potatoes.

Sunday, April 17, 1911: I got a supply of novelettes this morning. Will have something to do now during my leisure hours. Ruth and I expected company this afternoon, but they didn’t come. Gathered some dandelions.

This is the third time in less than 8 days that Grandma gathered dandelions (see the April 10 and 13 posts). In today’s world it is easy to get most any fresh fruit or vegetable we desire whenever we want them throughout the year, and it is difficult  to imagine how excited people once were when dandelions and other bitter greens became available in the spring. Throughout the winter months the family would have been eating vegetable that had been stored since the previous fall (potatoes, squash, parsnips, etc.). These greens were the first new fresh vegetables since the previous fall.

Husband Bill said that I’d been talking about how awesome dandelions were all week—and that I should make myself useful and help dig the dandelions out of the yard. We spent some quality time together, enjoyed a spring day, had dandelion for dinner, and the yard looks great! 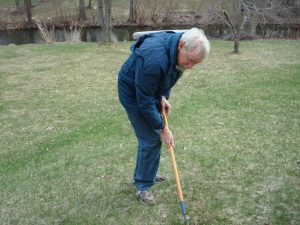 Monday, April 10, 1911: I helped to wash this morning. Mistress Besse was out this afternoon and went with Miss Ruth out to gather some delicious dandelion. Ours was no good after all.

Dandelion, endive, and other bitter greens used to be considered a spring tonic. People traditionally had a very limited selection of foods during the late winter months, and they really looked forward to eating fresh greens in the spring.

When I was a child we often ate creamed dandelion served over mashed potatoes in the spring. I remember older relatives saying that they felt healthier after eating spring greens.

Wash dandelion and tear into pieces; set aside.

Cut bacon into pieces and fry until crisp in a large skillet. Stir in flour, sugar, and vinegar. Gradually stir in milk; heat until bubbly using medium heat. Reduce heat to low; stir in dandelion and cover for 1 minute. Remove lid and stir until wilted. Delicious when served over mashed potatoes.