Wednesday, September 13 , 1911: Was in such terrible trepidation this morning, lest I would have to miss school and help Ma with the work, but Besse came to my relief. So glad I was. I missed those stacks and stacks of dishes for dinner, but have to confront them tonight.

Besse was Grandma’s married sister who lived nearby. The previous day Grandma wrote that the threshers were at the farm.  All the farmers in the community probably were at the Muffly farm helping with the threshing. And, I bet that all the hard work made them very hungry.

I’m on a roll remembering traditional Pennsylvania sweet and sour foods that might have been served to the threshers. Yesterday I wrote about spiced crab apples.  Another fall sweet and sour food is pickled cabbage (pepper hash).

Mix all ingredients together and let  stand at least 1 hour. This salad may be kept covered and refrigerated for several weeks. Drain before serving. 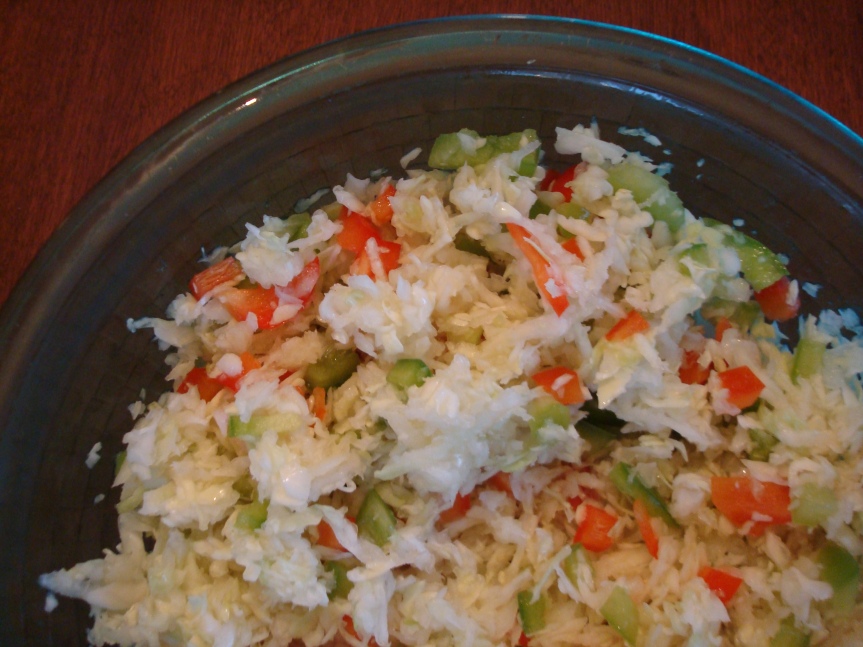 I got this recipe from my sister-in-law, Linda— and she says that she got it from her mother.  It is a very typical old-fashioned central Pennsylvania dish.

This recipe is very adaptable and can easily be made in larger or smaller quantities. Just use equal proportions of vinegar and sugar to make as much dressing as needed.

Linda says that the original recipe called for green and red mangos rather than green and red bell peppers. Traditionally people in central Pennsylvania and other parts of Appalachia referred to bell peppers as mangos. Of course, the mango fruit doesn’t grow in Pennsylvania, and until recent improvements in transportation the tropical  fruit wasn’t sold there, so there never was any confusion.