I’m a black walnut aficionado The bold, rich taste of black walnuts is lovely in candies and baked goods. And, as a bonus black walnuts are quite nutritious. They are a good source of vitamin E and iron, and have lots of protein. They  also contain “good” polyunsaturated and monounsaturated fats that can help reduce “bad” cholesterol.

Black walnuts are seldom sold in stores, so each autumn I scope out black walnut trees on nearby public property, and then forage the walnuts. I then hull the walnuts (and walk around for at least a week afterwards with walnut-stained hands), and then spread the hulled nuts out on newspapers to dry for several months.

A couple days ago my husband and I began to crack the walnuts, and then to pick the nut meats out, which is a challenge in itself. I swear that black walnuts are the most difficult nuts (except for maybe hickory nuts) to crack.

Now that I had the shelled nuts, I was ready to begin baking with them. I selected a hundred-year-old nut bread recipe. Any type of nuts could be used in the recipe–but black walnuts would have commonly been used in the early 1900s.

The Black Walnut Bread was easy to make, and it was a taste treat with the embedded, robust, savory pieces of black walnut. This recipe is a keeper.

Here is the original hundred-year-old recipe:

1 cup black walnuts, chopped (or other type of nut)

Preheat oven to 350° F. Grease two loaf pans.  Put the flour, sugar, baking powder,  and salt into a mixing bowl, and stir to combine. Add egg and milk, and stir just enough to blend the ingredients. Add the black walnuts, and gently stir to spread the nuts throughout the batter. Pour into the greased pans. Bake about 40 minutes or until a toothpick inserted in the bread comes out clean.

I couldn’t figure out why the old recipe said that after the batter was poured into the loaf pans that they should “stand aside to raise twenty minutes” before baking. Since this recipe called for baking powder (and not yeast), it didn’t seem like it needed to rise prior to baking so I ignored that step.

The holidays are a time for family fun, so when my daughter was recently home for Thanksgiving we decided that it was time for another post that compares a hundred-year-old recipe with a modern one. This year we decided to make Caramels.

My recipe called for brown sugar. The modern recipe used three sweets: brown sugar, white sugar, and light corn syrup. It included a note which said that corn syrup is “a controversial ingredient, for sure, but an imperative one for making candy as it prevents crystallization and keeps the caramels smooth as silk.”

The Verdict: The two candies were both good, but very different from each other.

The modern recipe was delectable. The Sea Salt Vanilla Caramels were smooth and creamy, and melted in my mouth. If you want a great Caramel recipe, I strongly recommend clicking on the link and going to Sally’s website for her recipe.

On the other hand, the  hundred-year-old Caramel recipe made a candy that barely seemed like a caramel. It tasted more like a praline. If, by chance,  you are looking for a delightful walnut praline recipe, the old recipe is the recipe for you.

The hundred-year-old recipe included a warning, “These directions must be followed to the letter.”  I tried my best to follow them to the letter, but apparently failed since I think that the caramel may have partially “crystalized” (or perhaps a caramel a hundred-years-ago was different from a modern caramel).

Here’s my version of the hundred-year-old recipe updated for modern cooks. (I made half of the original recipe.)

Prepare a 8 inch by 8 inch square pan by lining it with foil, and then buttering the foil.  Set aside.

Put the brown sugar, butter, and milk in a large, heavy saucepan. Using medium heat, bring to a boil while stirring. Reduce heat so that there is a slow rolling boil. Continue to stir until the mixture reaches the firm ball stage (245 – 248° F.). This can also be tested by dropping a small amount of the hot mixture into ice-cold water. It is done when a caramel-textured ball is formed. Add nuts before removing from the heat. Remove spoon from mixture while still boiling to prevent crystallization.

Quickly pour into the prepared pan. Scrape what remains into another dish. When cool turn onto a cookie sheet or board.  Cut into bite-sized pieces. If desired, wrap caramels in waxed paper. 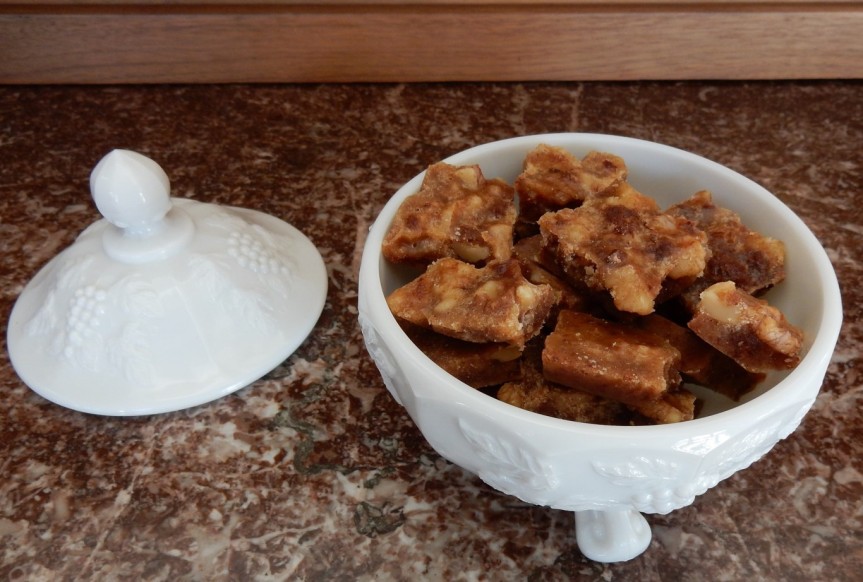 A few weeks ago Grandma mentioned hulling walnuts. At that time I gathered some black walnuts and hulled them. I then spread them out to dry. My husband I have now cracked some of them and taken the nut meats out.

We put them into a vice to crack them–and had problems with the walnuts flying all over the garage.

We then covered the walnuts with a piece of cloth before cracking. This worked really well at containing everything. Once the shell was cracked it was easy to get the nuts out. 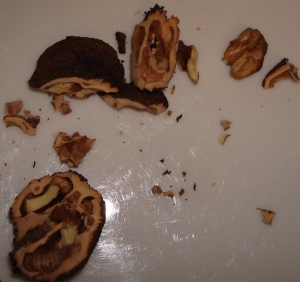 The walnuts tasted great–just like I’d remembered from my childhood. The flavor is more intense than grocery store walnuts–but it is really good.

Saturday, October 7, 1911: Hulled some walnuts this afternoon. Tried to be careful of my hands, but they got stained somewhat.

Black walnuts grow semi-wild in Pennsylvania–and across much of the US.

The hull is the outer  husk. It must be removed to prevent spoilage. The nuts are then dried. After they are dried they can be cracked.

Last week-end my husband and I gathered some black walnuts at a park. We took them home and hulled them. We put the nuts in an old net onion bag and hung them in the garage to dry. They’ll be ready to crack and eat by December.

Oct. 15 Addendum: I mentioned putting the walnuts in a net onion bag to my father. He was horrified and said that they would mold. He said they should be spread out on newspapers in a cool dry place (an attic is ideal).  So I checked my walnuts and noticed that two of them had a spot of mold of them. I discarded those walnuts–and spread the rest out on newspapers to dry.  Stay tuned . . .