For crying out loud, how can nothing be happening when you got invited to a party yesterday?  The party’s on Friday—aren’t you thinking about what you’ll wear? . . . what you say? . . .

At least you could have told us about everyday events. . . even if it’s boring stuff because I’d find it interesting.

For example, what birds did you see and hear today? I heard a woodpecker pecking (hopefully not on my house) today. Are there woodpeckers on your farm?

And, this time of year the trees in my yard are often filled with noisy crows. Are there crows cawing in your yard?

Since Grandma didn’t write much a hundred years ago today, I share some pictures from a book of birds published in 1914.

Crow: These birds, against which the hand of every farmer is uplifted, are very shy and cunning, as is well-known, they nearly always post a sentinel in some tree top to keep watch while the rest of the flock is feeding in the field below. In the fall and winter, large numbers of them flock, and at night all roost in one piece of woods.

Screech Owl: This well-known species, which is often called “Little Horned Owl” because of its ear tuffs. They nest anywhere in hollow trees, being found very frequently in decayed stubs of apple trees. They also often nest in barns or other old buildings which are not frequented too freely. Their food consists chiefly of mice and meadow moles, and occasionally small birds.

Chickadee: The Chickadee is too well known to need any description; suffice it to say that they are the favorites with everyone among all the North American birds.

A Rare Chance to Visit the National Capital

The Trip of a life-time. An education as well as a delight. An opportunity to see “The Heart of the Nation,” a city of magnificent distances, unlike any other city in the country.

Today the 200 mile drive from McEwensville to Washington DC takes at least 3 1/2 hours. I have no idea how low the train ride was a hundred years ago.

It is not what Ruth did, but I was surprised to discover that back then there were one-day excursion trips to DC from central Pennsylvania. The train left Williamsport right after midnight—and picked up people in several nearby towns and then raced to DC. The route would be reversed in the evening.

Imagine the excitement of catching a train in the middle of the night—and pulling into Union Station at dawn. . . and seeing the capitol outlined in the early morning sunlight.

Dang—I almost put myself into the story—and was ready to book a seat on the next excursion train; then I remembered that it was 2013.

Sunday, June 8, 1913:  Went to Sunday School this morning. From there I went along home with Margaret. Spent the afternoon and I came home later on.

Another minor mystery–Margaret could refer to one of two friends:  Margaret Bryson or Margaret G. (I don’t know Margaret G.’s last name. )

My gut feeling is that Grandma went home with  Margaret Bryson after Sunday School (though I don’t think that Margaret Bryson generally attended the same church–the McEwensville Baptist Church– as Grandma), because she is the Margaret most recently mentioned in the diary. She was the sister of Blanche Bryson and on May 13, 1913, Grandma wrote:

But, then again, Margaret might refer to another friend, Margaret G. On January 29, 1913 Grandma wrote:

. . . Margaret G. came home with me to stay till tomorrow. We had a dandy time this evening, although I am afraid our lessons suffered some. Rufus made candy. And so the evening went.

I’d like to thank Janet Shuman for making a comment on the previous post about the Bryson girls. She told me that Margaret was the name of Blanche’s sister.  Janet is related to the Brysons—and  her comments have really helped me learn more about them.

Delegates of Turkey and the Allies in Accord

London, May 31.—The preliminary treaty of peace was signed at St. James palace by the delegates of all the Balkan allies and of Turkey.

Sir Edward Grey, the British foreign secretary, presided at the conference as he did at the previous debates, in the capacity of honorary president, and opened the proceedings with an explanation of Europe’s attitude and of the necessity of insisting that there be no further delay.

The powers will not, however, be able to indulge in unalloyed self congratulations as the outlook in the Balkans is marred by the reports of continued warlike measures and even of conflicts between the allies. A dangerous temper is prevailing both in Servia and in Bulgaria.

All the efforts of Russia to bring about peace between Bulgaria and Servia apparently have failed, and the worst is still feared. Meanwhile the quarrelsome allies are throwing enormous bodies of troops into Macedonia for the purpose of occupying disputed territory.

Bulgarian artillery at Prava opened fire on the Greek positions in the directions of Eleuthera, according to the Exchange Telegraph company’s representative in Athens.

The Bulgarian commander refused to enter into negotiations with the Greek commander to stop firing. Owing to this clash a part of the Greek fleet has been sent to Eleuthera.

Grandma’s world often seems so small.  The diary provides little evidence that she was aware of happenings across the US and around the world.

But the newspaper that Grandma would have read, the Milton Evening Standard, regularly reported national and world events.

For example, the previous day  the paper contained the above article about a peace treaty–it’s called a war treaty in the headline, but the text says it’s a peace treaty– that was signed by the Balkan countries and Turkey.

The article indicates that the treaty may not have been totally successful—and obviously over the longer run it failed since World War I began a little over a year later due to continued unrest in the Balkan countries.  The war was triggered when Archduke Ferdinand of the Austro-Hungarian Empire was assassinated in Sarajevo, Serbia on June 28, 1914.

An aside—it’s interesting how the spelling of several cities and countries have changed across the years. In the old article:

–And, I’m not quite sure what Eleuthera referred to in the article (“. . . the Greek fleet has been sent to Eleuthera”), but I’m pretty sure that it wasn’t the island in the Bahamas.  🙂

Wednesday, May 28, 1913:  My dress is finished and ready to wear whenever that time comes.

Based on how quickly Grandma’s mother made the dress, she must have been an accomplished seamstress. On May 24, Grandma wrote:

Ma started to make my dress I got for a graduation present. I want it finished by May 30th.

Grandma’s mother made the dress in only 5 days! . . . and she beat the deadline her daughter imposed by 2 days!

Have Grandma’s plans changed?  On the 24th she seemed certain that she needed the dress by the 30th—now the dress is “ready to wear whenever that time comes.” 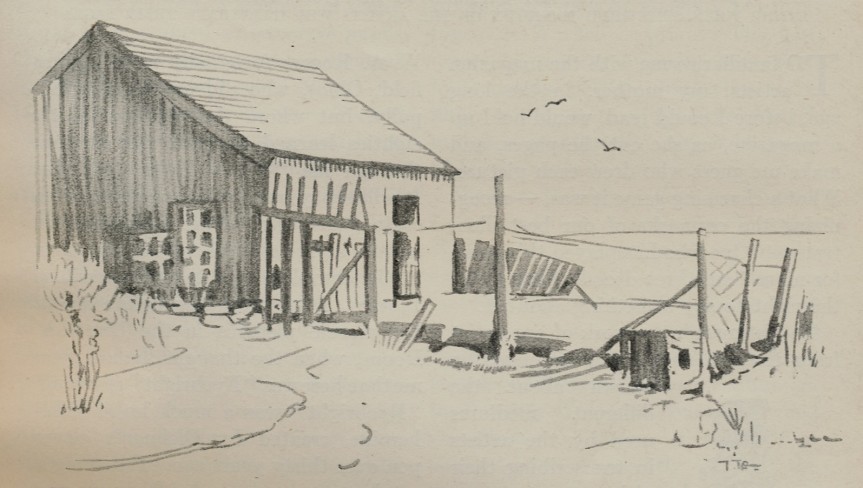 Rainy days can be the perfect time to work on artwork or crafts. Did Grandma ever while away a rainy afternoon making pencil drawings?

I recently came across a hundred-year-old magazine for teachers called School Arts Magazine. The January, 1913 issue had an article about how to teach students to make pencil drawings.

Do children today still learn how to make pencil drawings in school? . . .or is that considered “so old-fashioned”?

The Possibilities of the Pencil

With the many new elements that are crowded into the topic of drawing in the public schools—it is easy to lose sight of the fact that after all the universal medium of expression is the pencil.  Rightly employed the marvelous possibilities of the pencil are astonishing.

The proper teaching of pencil-rendering is not difficult if correctly approached. The tendency of every child is to make fine, hard lines instead of the broad, rich stroke which gives character to the result. With firm, smooth lines, much of color, texture, and light and shade can be pictured in a suggestive manner.

At first, detail should be almost entirely left out. The more a child “fusses” and “finishes” his drawing the more labored and unsatisfactory the results appear to be.

See to the condition of the pencil. It should be sharpened to a blunt point well supported by the wood, and the point flattened on one side to give it a form capable of making lines of all widths and qualities.

Before attempting a problem in drawing in light and shade, the pupil should gain some facility in handling the pencil—by practicing strokes and lines of varying width and color. The drill shown in Fig. 1 will give skill in laying tone flat and solid in appearance.

After this is accomplished the pictorial sketch may be attempted (Fig. II).

In beginning a sketch first decide upon the point of interest. Much must be omitted and many contrasts exaggerated in order to keep the attention centered upon this point.

After deciding what the central point is to be, a light sketch, in as few lines as possible, should be made. These first lines must be accurate, and no erasing should be done. The masses of light and dark are next considered, beginning with the planes in the important part of the drawing.

Select simple, flat masses and lay the tones in with the direct stroke already mastered in the preliminary practice (see Fig. III).

The direction of the stroke can be made to express contour and texture, and should be carefully studied from that viewpoint.

The sharp, vigorous accents of black will produce the contrast which brings out the light and sparkle of the sketch and adds so much to its beauty. The contrasts should be emphasized at the center of interest, and diminished into soft grays as they recede into the less important parts toward the background. .

It is easy to over-emphasize out-of-door nature subjects, such as flowers, fruit, and vegetables. The boys especially are more interested in the common objects of everyday life.

The pencil is by far the most convenient and best medium for most of the work that is included in a well-considered course of art instruction.

Saturday, May 24, 1913:  Went to Sunday School this morning. Was rather lonesome this afternoon.

Did Grandma ever play with her 8-year-old brother Jimmie when she was feeling bored?

Did Jimmie have a play room filled with his toys? . . . or (and I know that it’s a stretch) maybe a play house?

There was an article on “New Ideas in Children’s Playhouses” in the  June, 1913 issue of Ladies Home Journal. 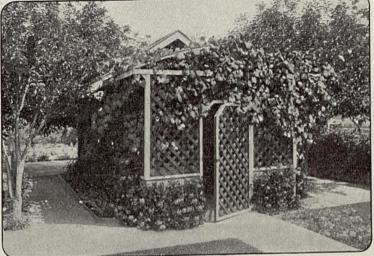 A little latticed playhouse covered with a grapevine which keeps it cool. 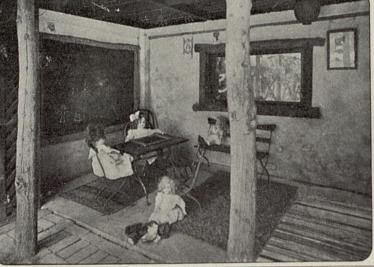 This is what it looks like inside. What a delightful place to play school!

A portable playhouse that may be moved from one part of the yard to another, so that when it is too sunny in one spot it may be moved into the shade.