Since Grandma didn’t write a diary entry again today I’m continuing to share other relatives’ memories of Grandma. My cousin Stu told me to ask his mother (and Grandma’s daughter) about the macaroni story.  This is what Aunt Eleanor told me:

When we lived in suburban Philadelphia in the ’60s, the kids and I would visit upstate, first with my parents – until my father died and after that with my mother.  We chose mid-August because that way we could catch the Swartz family reunion (on the third Saturday) and also because the tomatoes and sweet corn were at their absolute peak.

On one visit after my father died, I offered to make brown-butter macaroni as a contribution for one of the meals. That’s just plain macaroni cooked al dente, drained, and then dressed with a small amount of browned butter.  My hand must have slipped or something, and way more macaroni went into the pot of boiling water than I intended.   By the time it was boiled and dressed, it was a LOT of macaroni.

My mother, never one to keep silent on such matters, complained that I’d cooked too much macaroni.   And I, never able to accept her criticism passively, said no, that was about the right amount, the kids really liked their macaroni.  Then dishing up as the kids were gathering round, I took advantage of my mother’s hearing deficit to whisper to them (rather forcefully), “You kids better help me out here and eat all of this!”  And I’ve always been so proud of those little soldiers.  My mother and I ate normal portions, but the kids ate all the rest. 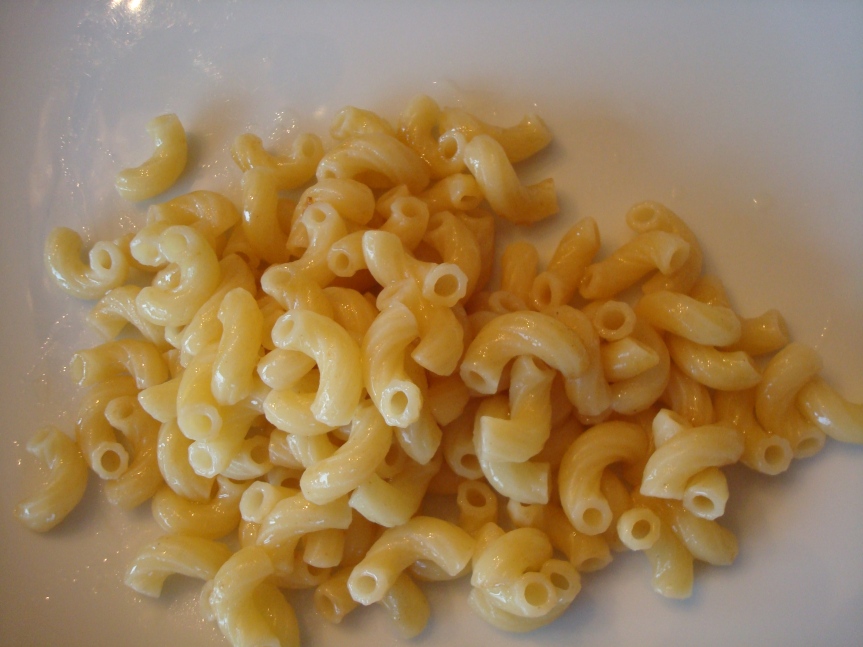 I had never heard of brown-butter macaroni so asked Aunt Eleanor several questions about how to make it. As with many old recipes there aren’t precise instructions, but she gave me some general directions.

Cook 2 cups of macaroni in salted boiling water until al dente (follow package directions); drain. Meanwhile melt and lightly brown (using care not to burn) 2 tablespoons of butter in a skillet. Stir the macaroni into the browned butter; put in a dish and serve immediately.

One thought on “Brown-Butter Macaroni”