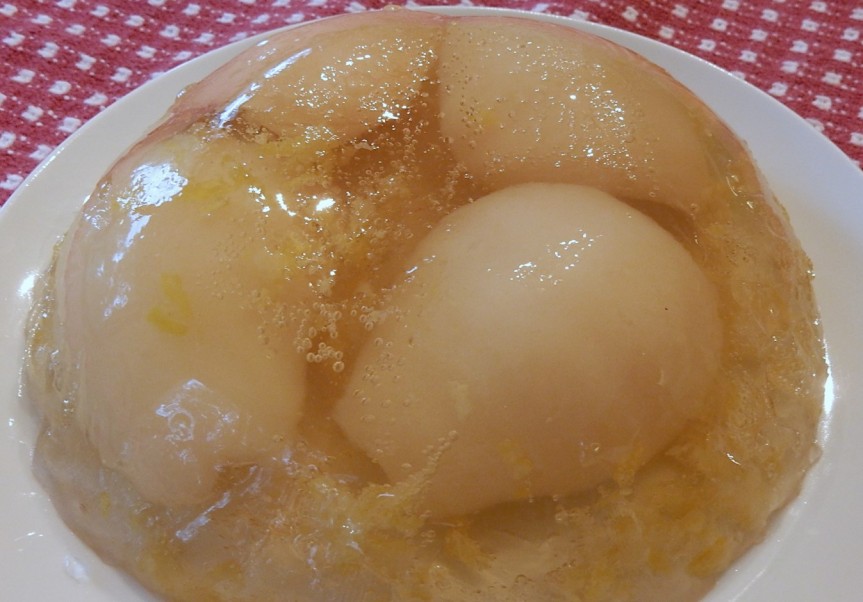 When I was a child, there was always lots of food at Labor Day picnics – including multiple gelatin salads. So I was thrilled when I came across a recipe in a 1919 American Cookery magazine for Ginger Ale Gelatin Salad just in time for this long holiday week-end.

The sparkling Ginger Ale Gelatin Salad was sweet and tangy, with a mild lemony undertone. The gelatin can be made with or without fruit.  A hundred years ago canned fruit was often added to gelatin, so I added canned pear halves – though other fruits could be used (or none at all).

The old magazine included a section where readers could ask questions, and this recipe was provided as a response to a request for a Ginger Ale Salad recipe. The reader making the request indicated that the desired recipe should be for a gelatin salad that could be made with or without fruit.

When I made the gelatin, I used an entire packet of gelatin since this recipe called for a total of 2 cups of liquid – and the gelatin box indicated that each individual packet should be used with 2 cups of liquid. Since the old recipe called for using 1/4 packet, I assume that gelatin packets were larger back then. I ignored the serving suggestion, and passed on the French or mayonnaise dressing with cocktail sauce. I also did not use small molds – and instead put all the gelatin into one mold. (I used a 1-quart bowl as the mold).