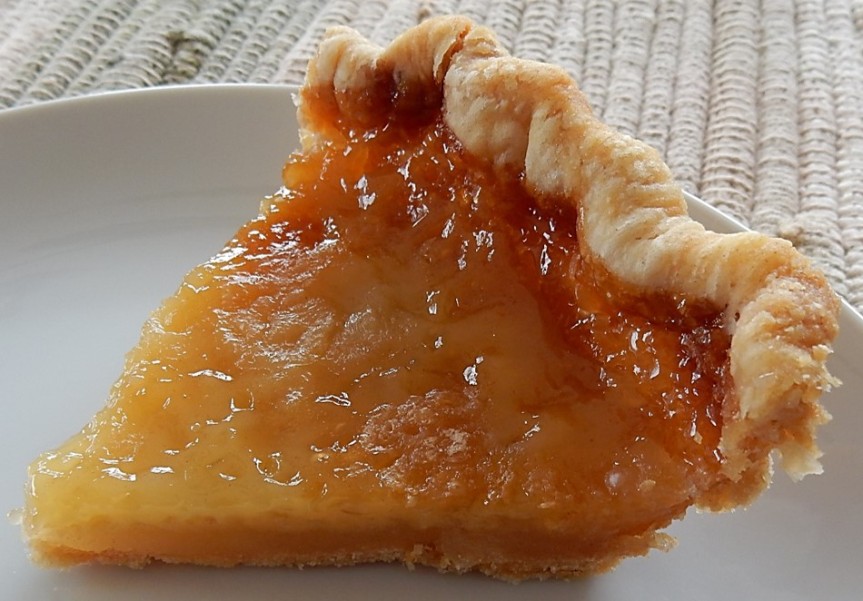 Old-fashioned Boiled Cider Pie is a delightful Fall treat. This pie has a smooth and delicate filling with a mild apple flavor and (even though it contains no milk) a lovely custard-like texture.

This recipe is from a 1905 cookbook published by a church in Berwick, Pennsylvania. I found the cookbook last summer when I was visiting the area in Central Pennsylvania where I had lived as a child. My husband and I were to meet someone for lunch – but we finished a visit with another friend earlier than anticipated. So when we saw that a tiny country church was holding a rummage sale, we decided to stop in to fill the time.

There was a sign which said, “Donate whatever you think the items you select are worth.” I was immediately drawn to the book table. There were lots of colorful cookbooks from the 1960s and 70s on the tabke. But then I noticed an a small dog-eared cookbook with  pages browned by age. I gently flipped through the book. Several pages were missing. But I could tell that it was old, really old; and that it was a church cookbook compiled by women in the nearby by town of Berwick.  My heart beat a little faster. I really wanted this book.

I picked up the 1905 Berwick cookbook, and another small pamphlet from the 1930s that contained recipes. I handed the church member serving as cashier $6 for the two items. She said, “Some of the other cookbooks are nicer, are you sure you want these?”

I said,  “I like old cookbooks” and walked out to the car. The woman obviously felt like I paid more than enough for the items I bought. Yet I’ve felt a little guilty ever since. To me, the hundred-year-old cookbook was a find worth much more than what I paid. Should I have made a larger donation?

And, here’s the recipe updated for modern cooks:

Put the cider in a saucepan, and bring to a boil using medium heat. Reduce heat and boil gently until it is reduced to approximately 1/2 cup (about 45 minutes). Stir frequently. Remove from heat. Set aside.

Preheat oven to 350° F. Put egg in mixing bowl and beat until smooth. Add sugar and flour; stir until combined. Then stir in the water and boiled cider. Put in pic shell and place in oven. Bake until the top is lightly browned, and the filling does not move in waves. (This pie takes a long time to bake. Start checking it after 45 minutes, but don’t be surprised it it takes more than 1 1/2 hours for the filling to thicken.)  Remove from oven. Cool pie before serving.