Monday, January 5, 1914:  Tried my hand at some sewing this afternoon. Teased my mother. (She simply has to take it, when I get busy.) So passed the afternoon.

Took a header on the porch tonight, but managed to go no further than my one knee.

I’d love to know what Grandma teased her mother about. In spite of the tumble–Was there ice on the porch?–, it sounds like a good day.

Did Grandma sew any seams? Here’s some hundred-year-old advice for making high-quality seams.

The Importance of Seams

When it comes to putting a garment together, many problems face the amateur seamstress, not least among these is the finishing of the joinings.

Suppose for example you are making a princess slip-on with a flounce. Now for the body seams of the garment you will want something at once dainty and durable, something that isn’t “bunching,” and yet will be strong enough to withstand strain. For this then the French seam is best adapted. This you make by joining the pieces with a narrow seam on the right side, then turn and make another seam directly over this on the wrong side. Thus you have the raw edges covered up and have a double sewing to give strength to the seam.

The French seam is used also on lingerie waists and children’s dresses, and may be moderately wide or very narrow, according to its place in the garment and the material used. Care must be taken to trim off ravelings before turning the first seam.

In making up heavier goods such as a petticoat of sateen, you will find felled seams are the best. There are two different kinds of these. One is made by opening out an ordinary seam of three-fourths to one inch on the wrong side, turn under the edges and sew down. This is a good seam for baby’s night-gowns since it is the least bunglesome. However, it is not so strong as the single felled seam which is made as follows. Allow one-edge of an ordinary seam to extend out about one-fourth inch over the other. Turn a small hem on this and basted down over the other edge and sew firmly.

The bound seam is used to finish joinings in dresses or skirts of heavy material and is made by binding the edges of an ordinary seam with seam binding which comes for this purpose. 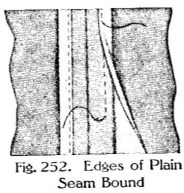 For baby’s flannel petticoats or woolen shirts baste open an ordinary raw seam and feather stitch on the right side. The raw edges on the inside are left unfinished so that the seam will be as flat as possible and there is no danger of chafing baby’s tender skin.

One of the essential things that many amateurs neglect in finishing a garment is a careful pressing of all seams, as the garment is put together and also when it is a finished product. Many a garment loses that “homemade” look and assumes quite a professional air when treated to a good pressing.

In the Homecraft on the Farm section of Kimball’s Dairy Farmer Magazine (February 1, 1914)