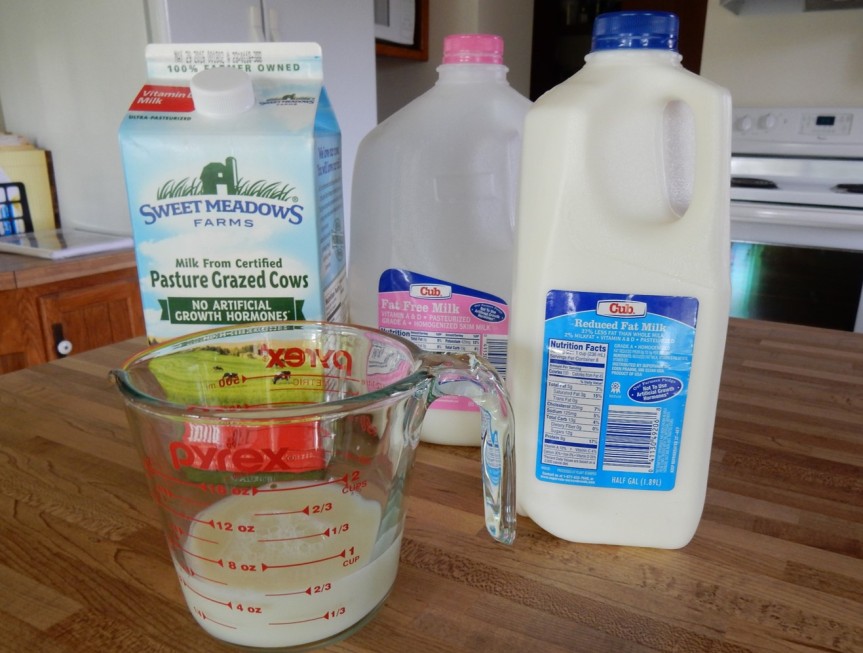 Do you even get a question that stumps you? Well, I recently did. A friend asked whether whole, 2%, 1%, or skim milk should be used when making the hundred-year-old recipes that I post on this blog.

I replied that I use whatever kind of milk I have in my refrigerator–and that they all seem to work just fine. But, the question kept nagging at me. None of the milk varieties that are readily available today are exactly the same as the milk of a hundred years ago.

I have seen a few hundred-year-old recipes that call for “rich milk.” I take this to mean that the milk is creamier than most. This suggests to me that the recipe is calling for milk from cattle breeds that produce particularly high levels of cream (Jersey, Guernsey), but it might refer to whole milk.

A hundred years ago, there was wide variation from area to area in whether milk was pasteurized.  Unpasteurized milk was used rural areas, as well as in many towns and cities. Commercial pasteurization began in the 1890’s. In 1907, Chicago was the first U.S. city to require it;  in 1947, Michigan was the first state to mandate it.

The differences in the diets of the cows a hundred-years-ago affected the taste of the milk. The cows ate a diet that varied across the course of the year –  pasture during the warm-weather months; hay, corn, and oats during the winter months.  Growing up on a dairy farm, I can clearly remember how the taste of the milk changed each spring when the cows first went out to pasture.

Whew, there are so many things to think about. I still don’t know  whether whole, 2%, 1%, or skim milk is the closest to the milk called for in hundred-year-old recipes. But, I’m going to quit worrying about it, and start cooking.