Monday, February 12, 1912:  Got my valentines in preparation. They’re all ugly ones. I thought one was most too much to send as it was rather mean looking. But I got it ready, so it has to go. 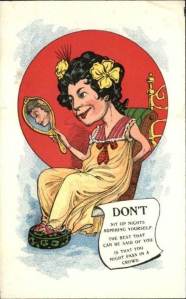 DON’T sit up nights admiring yourself.

The best that can be said of you

Valentines: The Good, the Bad, and the Ugly