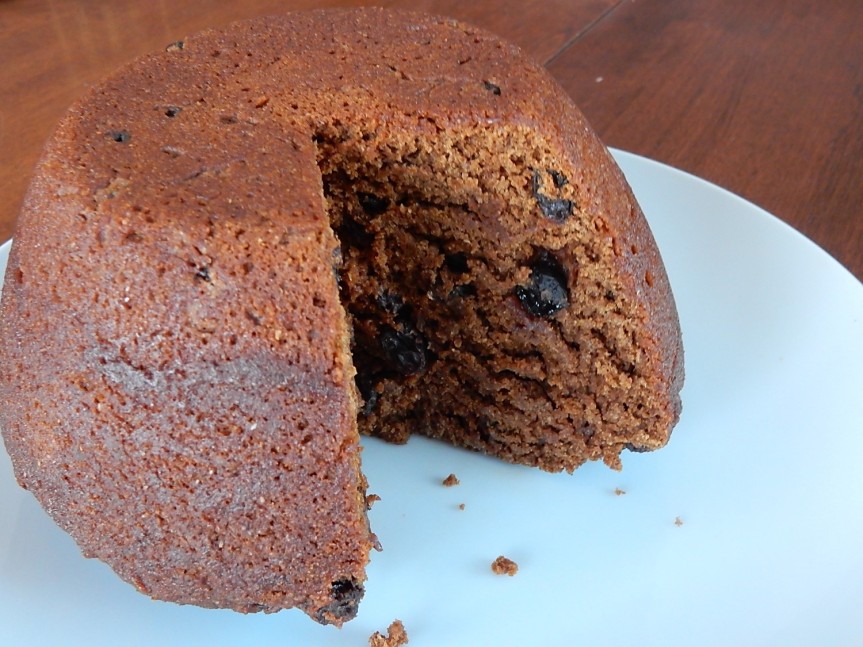 I’m stranded in the house by cold weather and snow, so I decided it was the perfect time to make a hundred-year-old recipe for Steamed Graham Pudding with Lemon Sauce. Since I had nowhere to go, it didn’t faze me that the recipe called for steaming the pudding for 2 hours.

It was worth the time and effort. The moist, rich Steamed Graham Pudding was embedded with raisins, and had sweet and sassy molasses undertones. When served with Lemon Sauce, the tartness of the sauce balances nicely with the heartiness of the pudding.

Here are the hundred-year-old recipes:

I decided to go with “good” and served the pudding with lemon sauce, rather than topping with whipped cream to make it the “best.” It’s a bit of an overstatement to say that the pudding is “almost as light as a souffle,” but it is simply delicious.

I used a steamed pudding mold to make the pudding. The molds can be found in many (usually upscale) cooking equipment stores. It’s unfortunate that Target, JC Penney, and other more mainstream stores no longer sell these molds; however, casserole bowls can also be used as a mold. BBC Good Food has an excellent video that succinctly describes how use a bowl to make a steamed pudding as well as general information about making steamed puddings.

Combine the graham flour, milk, molasses, baking soda, and salt in a mixing bowl, then stir in the currants or raisins. Put the mixture in a greased mold, and put the mold on a rack in a deep kettle; add enough water to come half way up the mold. Cover kettle. Bring to a gentle boil and steam for 2 hours. Remove from mold and serve warm with Lemon Sauce or whipped cream.

Put the sugar and corn starch in a saucepan, and stir together. Add water and stir until smooth. Using medium heat bring to a boil, reduce heat and simmer while stirring constantly for 10 minutes. Remove from heat, and stir in butter, lemon juice, and nutmeg. Serve warm. 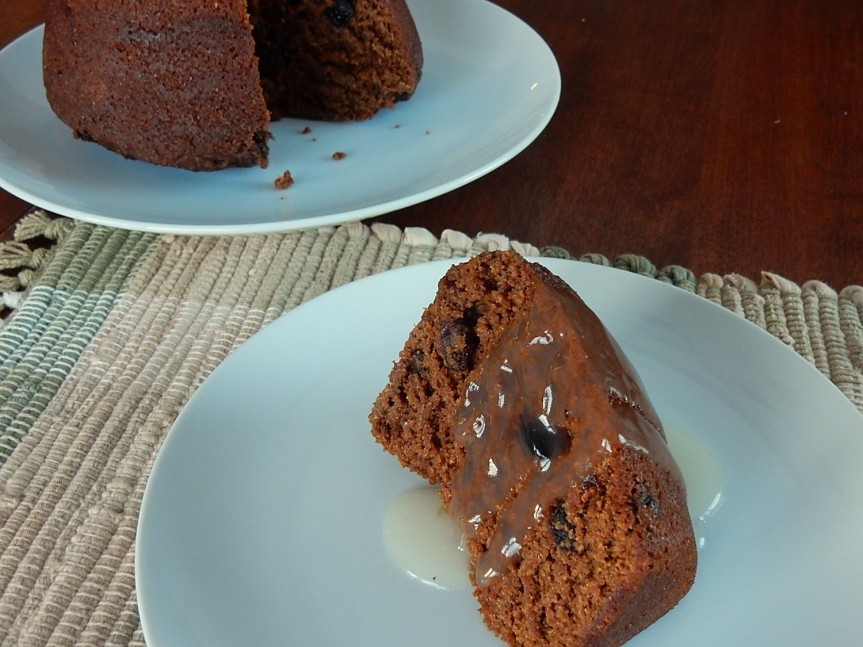 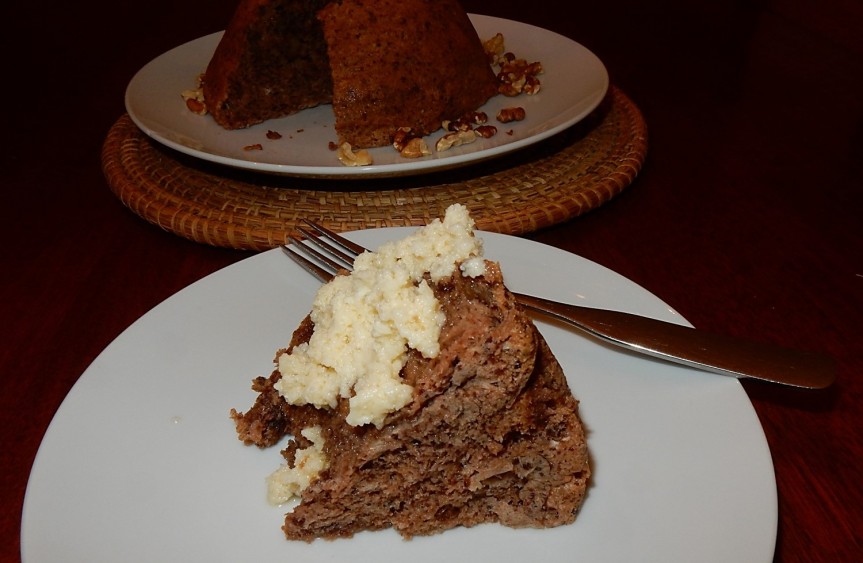 Hundred-year-old cookbooks have oodles of steamed pudding recipes. These slow-cooking molded desserts were easy to make back in the days when people had a fire constantly burning in a wood stove. I have vague warm fuzzy memories of steamed puddings made by an elderly neighbor when I was a child, and I’ve wanted a pudding mold for some time–so I was thrilled to get one for Christmas.

A few day ago I flipped through my old cookbooks, and tried to decide which pudding recipe to make. I finally decided to try the recipe for Chocolate Nut Steamed Pudding because it sounded delicious – and didn’t require steaming for as long as many other puddings. (It only needed to be steamed for 1 1/2 hours.)

This recipe was worth the time and effort. The pudding was incredible.  I expected the pudding to be heavy and rich–and was thrilled that it actually was moist, yet light, with a hint of chocolate that enhanced the taste of the walnuts. The recipe called for beating 5 egg whites (and only 1/2 cup of flour) which resulted in a very light cake-like dessert.

I served it with Hard Sauce (which is actually a brandy butter). The Hard Sauce partially melted on the warm pudding surface releasing a luscious buttery brandy essence .

Here’s my updated version of the recipe for modern cooks:

In a saucepan, combine the 2 tablespoons sugar, flour, salt, and grated chocolate. Gradually stir in the milk to make a smooth mixture; and put on a stove burner at medium heat. Cook until the mixture thickens while constantly stirring. (This mixture become quite thick, so use care not to scorch.) Remove from heat and set aside.

Put the egg whites in a bowl, and beat vigorously until stiff peaks form.

Working quickly (so the egg whites remain beaten), put the egg yolks and sugar in another bowl; and combine. Add the chocolate mixture, and beat until smooth. Stir in the walnuts, and then gently fold in the beaten egg whites.

Put the mixture in a greased mold, and steam for 1 1/2 hours.* Remove from mold and serve warm with Hard Sauce. (This pudding is also excellent cold without the Hard Sauce.)

*Notes: I used a 2 liter mold, but had some extra space at the top. A 1 1/2 quart mold would be large enough. Historically coffee cans were often used as molds. BBC Good Food has an excellent video that succinctly describes how to steam a pudding (or follow the directions that come with the mold).

Cream the butter, then slowly add the powdered sugar while stirring constantly. While continuing to stir, add the water, and then the brandy.

There were two Hard Sauce recipes in the cookbook. I adapted the first one.