Last week the eggplants at the farmers’ market just seemed to call me. Their beautiful deep purple color, and smooth curves made them aesthetically pleasing. I also knew that eggplants are known for their versatility because they have little flavor of their own, but rather absorb the flavors of the foods and spices that they are cooked with.

Once I had purchased an eggplant, I had a new challenge – finding a hundred-year-old recipe that called for eggplant.

After browsing through old magazines and cookbooks, I think that I found a winner. Scalloped Eggplant is made by slicing eggplant, then layering it in a casserole dish with grated cheese, and smothering with tomato sauce. It is then baked in the oven until the eggplant is tender.

The Scalloped Eggplant was delicious, and can be served as either a meatless main dish or a hearty side dish.

Today eggplant is generally written as one word, but that has not always been the case. Based on the way it was written in this recipe, it was two words a hundred years ago.

I used cheddar cheese when I made this recipe. And, I didn’t sprinkle the layers in the casserole dish with salt because I had previously soaked the eggplant in salt water. There is also salt in the cheese and tomato sauce. Sometimes I think that people in 1919 liked saltier foods than what we do today.

Peel eggplant and slice it into 1/2 inch slices. In a large bowl, combine the water and salt. Add the eggplant slices. Put a plate or other weight on the eggplant slices to keep them from floating. Let soak for 30 minutes. Drain and rinse.

Cover dish and bake in oven for 35 minutes. Remove lid and continue baking until the eggplant is tender (about another 10-20 minutes). Remove from oven and serve.

During these last days of summer I’m enjoying all the wonderful fresh vegetables, so when I saw a recipe for Eggplant en Casserole in a hundred-year-old magazine, I was intrigued and had to give it a try. The recipe had an old-fashioned goodness, with a taste and texture that was a little different from more modern eggplant casseroles.

The recipe is made with mashed eggplant that blended nicely with the other ingredients. In addition to the eggplant, the recipe called for corn and onion – as well as a little tomato soup, and it was topped with a crispy bread crumb topping.

Preheat oven to 375° F. Peel eggplants and cut into slices. Put into a steamer basket, and steam until tender (about 15 minutes). Remove from heat and mash.

In the meantime, melt the shortening in a skillet using medium low heat; add chopped onion and saute until tender. Stir in the mashed eggplant, corn, tomato soup, salt and pepper. Put into a casserole, cover with bread crumbs and dot with butter. Put in over and bake until hot and bubbly (about 1/2 hour). 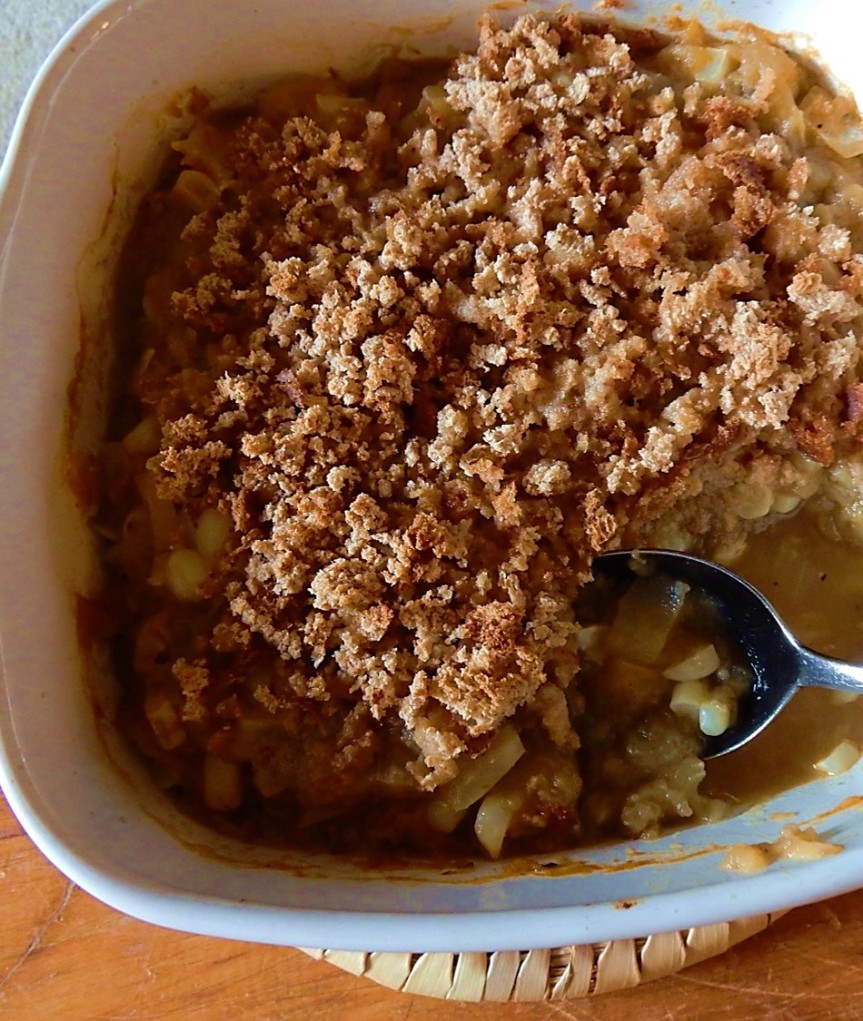