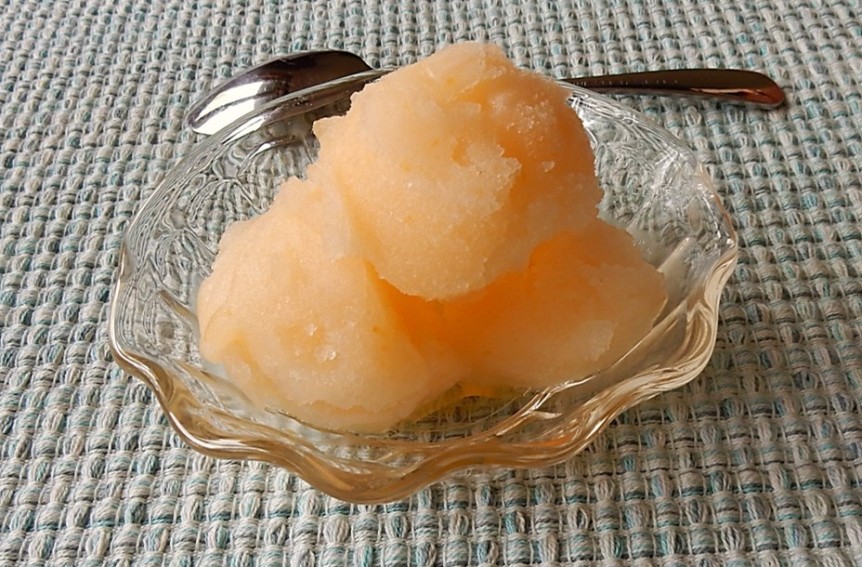 The store where I shop recently expanded its selection of canned fruits. Several weeks ago I noticed that there were canned apricots on the shelf and decided to buy a can. I put the can in a kitchen cupboard and figured that I’d eat the apricots “someday,” so I was pleasantly surprised when I came across a recipe for Canned Apricot Sherbet just a few days later.

The sherbet was easy to make with just three ingredients – canned apricots, sugar, and water. It was light and refreshing, and makes a delightful summer treat.

Today sherbet is often a summer dessert, but a hundred years ago sherbet and ice cream were often winter treats. Many people did not have ready access to ice in the summer, but could easily use ice or snow to make frozen desserts during the winter.

The directions in the old recipe about using snow to make the sherbet reminded me of when I used to post my grandmother’s diary entries. As some of you may remember, I originally started this blog as a place to post my grandmother’s diary entries a hundred-years to the day after she wrote them. She kept the diary when she was a teen living on a farm in central Pennsylvania. On Sunday, February 12, 1911 she wrote about making ice cream:

Pa and Ma went away today and we had the house to ourselves while they were gone. Of course we had a fine dinner for my sister is an excellent cook, or rather she thinks she is. Any way we had dinner. Ice cream consisted of part of it. I had to turn the freezer, which I soon tired of. (I usually tire of anything I don’t like.) Any how I froze that cream so hard that it all crumbled up in big chunks . . .

Where did Grandma get the snow or ice that she used to make the ice cream? Did she gather snow from a snow bank? . . . or did she find some large ice cycles that had fallen off the roof? . . . or maybe she went down to the nearby creek to gather ice. . . or . . .

I went to Sunday school this afternoon and staid for church and catechize. The walking was extremely bad, but still I went. We had chocolate ice cream for supper. We all rather like it, so we have it occasionally which is about once in a week.

Drain apricots and press through a sieve.  (I used a Foley mill. The apricots could also be pureed using a food processor or blender.) Set aside.

Put sugar and water in a mixing bowl; stir until the sugar is dissolved. Stir in apricot pulp.

Chill the mixture in the refrigerator for several hours, then place in ice cream maker and freeze. (I used a 1 1/2 quart automatic electric maker.)