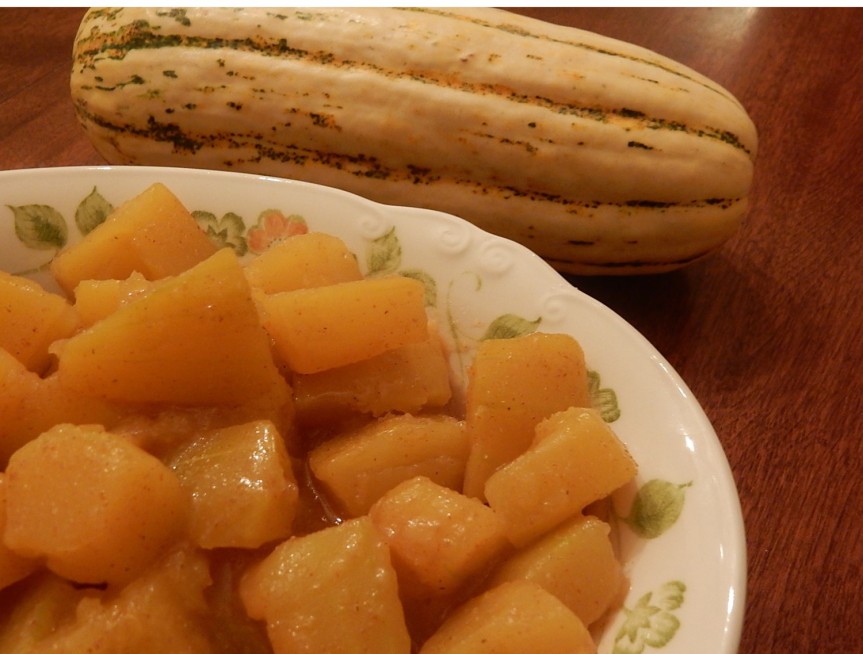 Each Fall I buy a Delicata squash and roast it, but until I came across a hundred-year-old Delicata squash recipe, I never gave any thought to other ways that it might be prepared. It was fun to try a “new” way of serving this old-time squash.

The century-old recipe was for Delicata Squash in Brown Sauce. The recipe called for cubed squash that is served in a delightful classic brown sauce.

I made several adaptions and assumptions when making this recipe. I used fresh Delicata squash rather than canned. And, I used butter rather than “fat.”

I was a bit foggy about what was meant by three slices of carrot and five of celery. Does the recipe really mean just a few small pieces of sliced carrot and celery – or was it referring to larger chunks? I made the assumption that the recipe was calling for one carrot and two stalks of celery – but this may not be what the recipe writer intended.

And, have you ever heard of mushroom ketchup? Since I didn’t have any idea what it was, I went with the Worcestershire sauce option.

And, here is the recipe updated for modern cooks:

2 slices of a large onion

Peel squash, halve and remove seeds and membranes; then cut into 1-inch cubes. Place in a saucepan and cover with water. Put on the stove and bring to a boil using high heat; then reduce heat and simmer until tender (about 15 minutes). Remove from heat and drain.

In the meantime, melt butter in a skillet. Add onion, carrot and celery; sauté until tender using medium heat. Stir in the flour, and continue stirring until the flour just begins to brown. Gradually add beef broth while stirring constantly; continue stirring until the mixture comes to a boil. Remove from heat and strain; reserve the strained sauce. (If desired, the cooked vegetables may be served separately; otherwise discard.) Return the strained sauce to the saucepan; stir in salt, paprika, and Worcestershire sauce. Reheat until hot.