Saturday, June 24, 1911:  Mother cut my lawn dress out this afternoon. Am going to see how long it takes her to finish it. I give her till next Sat. evening. Have to carry the hay rope now. Such fun. 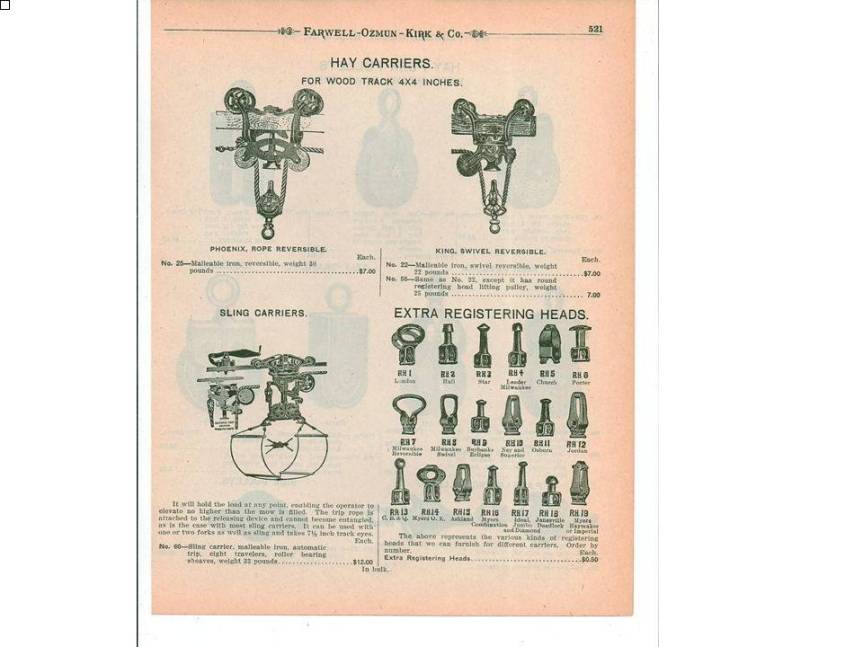 The Muffly family must have been making hay—always a hot, difficult job. A hundred years ago hay was not baled. Instead dried loose hay was brought into the barn on a wagon and then hoisted into the mow using a rope and pulley system.

I called my father to get help figuring out what “carry the hay rope” meant.  My father guesses that Grandma was half carrying and half dragging the hay rope to keep the horse from inadvertently stepping on it. Let me explain how they used to get hay from the wagon into the haymows.

(Some of you probably know much more about how hay was made in the old days—and please feel free to jump in if I’m not explaining it quite right.)

Dad said that when he was young there were pulleys on a track that ran down the center of the inside of the barn roof. Depending upon where the farmer wanted to pile the hay the pulleys would be moved along the track.  A young man with excellent balance would climb up onto a beam in the barn rafters and move the pulleys along the track as needed.

One end of the rope was attached to a large clamp (hay hook) that was used to pick up a large bunch of loose hay from the wagon.

The rope went then went through the pulley system—and the other end of the rope was attached to a horse. On command the horse walked forward and the pulleys lifted the hay into the mow.

The hay was then released and the rope went limp and a portion of it would fall to the barn floor. The horse would then be walked back to the original position and the process would be repeated.

My father says that when he was a child, the adult men did the heavy work, and the children did the easier jobs. His older sister Marjorie would lead the  horse as it pulled the hay upward—and then circle it back to the original position after the hay was released.

And my father would pick up the rope when it fell to the floor after the hay was released and keep it away from the horse’s feet. Dad says that if a horse stepped on the rope it would damage it by breaking some of the strands. Then there would be the risk of the damaged rope breaking, which might result in a dangerous accident if it broke while the hay was being lifted.

10 thoughts on “Hay Pulleys and Ropes”