Saturday, August 23, 1913:  Ruth and I went to a festival up at McEwensville this evening. 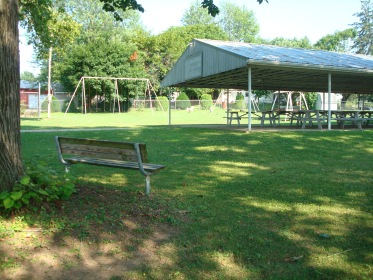 The festival probably was held in the small park next to the McEwensville Community Hall.

I bet that Grandma and her sister Ruth played the Cakewalk game.  It used to be a popular fund-raiser game at festivals, but I haven’t seen it in years.

People would donate homemade cakes to be used as game prizes.

The game is kind of like musical chairs. Numbered squares are laid out on a circular path. Music is played while the participants walk around the path. The music then stops, and a number is called out. The individual standing on the square with that number wins a cake.

Tickets are sold to participants. The number of squares in the path equals to the number of tickets sold. For example there might be 20 squares. The game is run multiple times until all the cakes are gone—with 20 people participating in each game.

An aside–when I was preparing this post I googled the term cakewalk  and was surprised to discover that the game that I remember isn’t what the word generally means.  Cakewalk had it originals on slave  plantations in the South in the 1800s. According to The Free Dictionary cakewalk is “A 19th-century public entertainment among African Americans in which walkers performing the most accomplished or amusing steps won cakes as prizes.”

16 thoughts on “Cakewalk Games at Festivals”