Sunday, November 3, 1912:  Went to Sunday School this afternoon. Besse and Curt were out. Wasn’t here when they came. 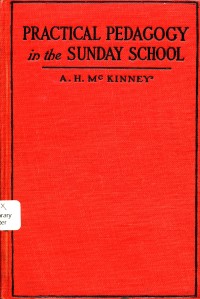 Grandma seldom missed Sunday School. What was it like? She attended a small church—probably a Baptist one—in the small village of McEwensville. Most weeks there probably were only a few other students in her class.

A book published in 1911 called Practical Pedagogy in the Sunday School described what an engaging class looked like:

The class was seated in three double pews at the rear of the auditorium of the church. Standing in front of the rows of well-dressed young women was a teacher not much older than her pupils.

She had her Bible open in her hand and proceeded to ask questions therefrom and give explanations. Although she frequently looked at the Bible, it seemed as if her eyes were continuously on her class, taking them all in as she glanced along row after row.

When she noticed the least tendency to inattention, she quietly leaned over the pew in front of her and lifted up something in such a way that on one could tell just what it was.

Her very action was intended to appeal to the curiosity of the young ladies. It did not take many seconds for every eye to be riveted upon her. The she showed what was in her hand—a picture illustrating that part of the lesson text on which she was engaged.

When the picture was laid down the teacher proceeded with her conversational instruction.

In conversation with this instructor it was ascertained that she never makes an appeal twice in exactly the same way.

Every Sunday she has something to excite the curiosity of her pupils, which she satisfies in such a way as to leave an impression of the truth she has to teach.

No formula can be given nor rules laid down. The alert, intelligent instructor, who is fully conscious of the power that lies in the appeal to curiosity, will devise her own methods in accordance with the age of her pupils and the circumstances under which she labors.

Besse and Curt refer to Grandma’s married sister Besse and her husband Curt Hester. They lived near Watsontown, about a mile from the Muffly farm.

5 thoughts on “What Were Sunday School Classes Like a Hundred Years Ago?”