Sunday, June 9, 1912:  Went to Sunday School this morning. Carrie and I were going away this afternoon, but didn’t go as Pa and Ma went away and I had to take care of the house. Rufus brought Tweet home with her.

Grandma referred to her sister Ruth as Rufus in this post. Tweet was the nickname of friend, Helen Wesner. And, Carrie Stout was another friend.

It sounds like Grandma was a little annoyed about being stuck at home—but it also sounds like an afternoon filled with the chatter of teen-aged girls. The probably talked about the same things girls talk about today. Might they are fretted over a few pimples?

Here’s information about pimples abridged from a hundred-year-old book.

Pimples or Blackheads and Acne

These are afflictions of youth, and are generally seen together, the last-named being simply a second stage of the first. It occurs most commonly about the face, on the back between the shoulders, or on the chest. 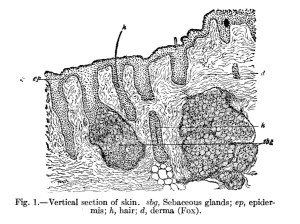 The impaired function of the general system must be corrected. First and foremost comes attending to the bowels. There must be a free daily evacuation. Fruits and vegetables are both laxatives and the very best.

All articles of diet must be easily digested, while at the same time they are nourishing.

Three pints a day of water should be taken because this amount is need to keep the kidneys properly flushed.

Pure air, associated with the proper kinds of exercise, promotes the functions of the skin, assists in keeping the blood in good condition, increases the vigor and keeps the complexion clear.

Steam the face. The increase secretion from the skin which is thus caused is helpful.

Sweating baths are of the highest value as a means of ridding the skin of its accumulated impurities, and in unloading the obstructed sebaceous follicles of their hardening contents.

When there is a tendency to pimples, massage of the skin of the face will do much to improve the circulation.  The massage is most effective when it follows steaming or washing the face in hot water.

Personal Hygiene and Physical Training for Women (1911) by Anna Galbraith

15 thoughts on “Old-fashioned Treatments for Acne and Pimples”