Thursday, April 25, 1912: I am beginning to worry about final exams. I’m afraid that I may get left in some of my studies. But I hope that it won’t happen that way. 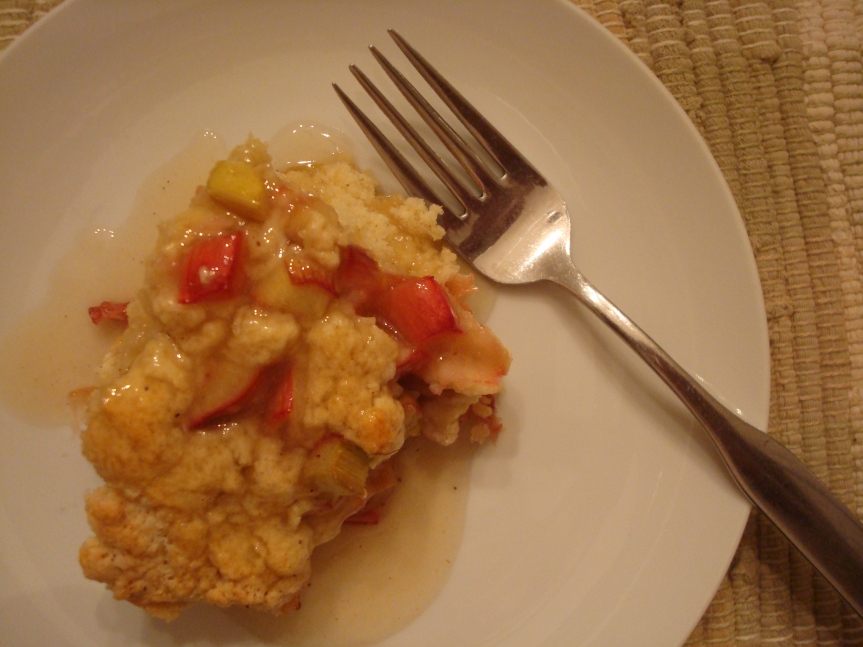 It sounds like Grandma was at the procrastination stage—she knew that she needed to study, but hadn’t gotten beyond worrying.

When I procrastinate, I think of other things that MUST be done—like cooking.

Here’s an old Rhubarb Pudding recipe that I found in the April 1912 issue of Good Housekeeping magazine.

The only spice that I used was 1/2 teaspoon of nutmeg. The batter was extremely thick. I baked the Rhubarb Pudding in a 375 degree oven. It took about 40 minutes for the top to brown lightly. (Maybe I should have used a higher temperature.)

The Rhubarb Pudding was quite good. It was a pleasant mixture of sweet and tart tastes, and had the texture of shortcake.

I served the Rhubarb Pudding with Vanilla Sauce.

Mix sugar, cornstarch, and salt in sauce pan. Add boiling water; and boil until thick and clear. Continue simmering over low heat, while stirring for 20 minutes. Stir in the butter, vanilla, and nutmeg. Can be refrigerated and reheated.

Rhubarb is one of my favorite Spring foods. Here are the links to past posts that included Rhubarb Recipes: